Getting the games to run


82 replies to this topic

Hey, I'm new to the forum, and I was hoping I could get a little (ok a lot) of help. I love QFG, I mean I really do, definitly one of my favorite series of all time, but I have the hardest times getting it to work...I just downloaded dos box, and I have a copy of QFG collection I...acquired. I also have the quest for glory anthology on CD. But, my problem is I don't know how to get them to run at their best, or at all for that matter. If there's a guide out there, I'd loved to be pointed toward it, as I'd love to give these games another go. Well, if anyone can help me out, that'd be great. I've already downloaded dosbox, but don't know where to go from there...thanks all.

We have help for you all over the place - try going here for extensive help on DosBox.

You might also want to try NewRisingSun's patches for the games. They are available directly from here.

Read through this thread for a lot of information about this subject, too.

And if you have any further questions, don't hesitate to ask! 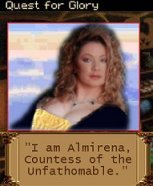 Note that the following instructions are for Win XP. For other OS'es, just ask..

Run with VDM Sound and Speedset (set to .005, ask me if you don't know how to do this) to obtain roughly correct music. QFG2's driver is almost as good as playing with a MT-32. Almost..

QFG1VGA- run with General MIDI and the digital driver to patch your 'audblast.drv' here: ftp://ftp.sierra.com/pub/patches/pc/sb16drv.exe
Then use VDM Sound and Speedset (.005) and music plays perfectly.
Also run with NewRisingSun's timer fixes.

QFG4- Timer fixes (again), run with GM and the digital driver should work fine. No worries. Any further timer problems can be solved by using Turbo. Just use VDM Sound- Speedset does NOT support SCI32 games at this point. DOSBOX could be a good alternative with this game if you care about music (which you should for QFGIV!).

QFG5- There's a patch for the version out there that's easy to find.

Thanks very much both of you, I've started perusing the resources, and compiling everything into a folder on my desktop. Now I have to go about finding myself an avatar...

I think It'll probably take me awhile to get these games working, as I usually need to be led by the hand with stuff like this. I'll do my best to figure it out on my own though, thanks again, and I look forward to talking to you both more in the other forums

alright, I dusted of my anthology CD, and set to work. I'm trying to get the first game working, I installed it through the setup in QG1 old. Now, the part where the help quide says

If you are running the Qfg Anthology you should find the game folders here:

To get to the location type the following command:

I setup the drives in the config as the guide shows as well, can anyone help? After reading everyones success stories, I'm anxious to make a new hero and play through all the games...

Edit, tried installing it through the anthology CD installer (You know, pick which language, pick which games, pick directory) and when I try that, it says access denied and something else really quickly and then the window shuts down...any idea?

Also, can't seem to find a setup.exe, so I've been trying the installers...I get the nagging feeling that I'm screwing up....

I'll let you know something straight up. Ignore anything the CD says. The 'cd' command ONLY works under DOS. That's all.

If you can, look on the CD and see if you can find folders with the games in them.. If you can, get back to us. I'm sure I can help you from there.

Yep, the game folders are all in there, but I've already tried using those installers...but any instruction would be nice...

I've always done this the easy way... Since that isn't working for you, let me yell for some help.

*jumps in through the window in a panicky state*

Will, the guide, the guy was using the .60 (I think) version of dosbox, and I'm using .62. Might this be causing some of the problem? It seems to me that the majority of the problem seems to be with anthology, or my comp...none of the files seem to want to install to my hard drive...errors aplenty.

My Computer setup is the following


ARGH, I want these games to work SO badly...I'll do anything for anyone to help me get them running!

Hmm, When I try running the setup now, I window opens along my toolbar, and the sierra music plays...but I can't open the window, so it justs sits there and does nothing...it seems god doesn't want me to play this game.

God has great taste and is kindness personified, so let's not jump to conclusions here... <grin>

I'm emailing Unknown Hero, who is an expert at these questions. Hang tight and we'll see if we can't get this working for you...

Woot, thanks a lot (bows graciously)

Of course, if you wanna duke it out with theology, some would argue that God is merely the unmoved mover, and CAN'T be the embodiment of kindness, and kindness is a human canception, and humans are flawed, and since humans are flawed, out concept are as well, and God of course can't be flawed...

(Of course, all that above is presuming there actually IS a god, which is a whole nother can of worms in itself)

As I said last night-

Copy the game folders to c:/sierra. Then run the install.exe files.. The games shold work if you're playing with VDM Sound.. or DOSBOX. But DOSBOX is really only useful for QFG4.

Well, I've read your post a couple times, and I didn'd see anything about copying and then installing....

Anyways, tried it, same exact thing as when I tried installing off of the CD, I get to the point where it asks what drive to install to, I click C, the entire thing just shuts down in a flash.